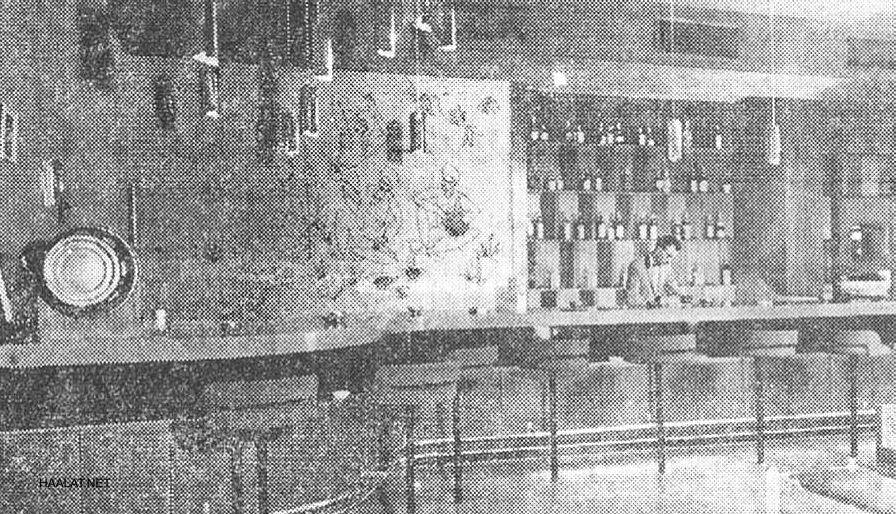 The bar at the Commodore Hotel in Tehran // Haalat.net

In February 1978, Takhte Jamshid Street in the center of Tehran, where the U.S. embassy was located, had a different atmosphere. Iranian revolutionary leader Ayatollah Khomeini had not yet assumed power and Iran enjoyed relative social freedoms–freedoms that are now a distant memory.

The luxurious Commodore Hotel, a stone’s throw from the U.S. embassy, was a hangout for hip youngsters. It also was known as the most popular spot among Iranian gay men. The fame of the hotel’s steam sauna even spread to neighboring countries. It was even rumored two Emirati princes had been spotted there. Various restaurants, dance and movie theaters, and luxurious pubs complemented the scene.

But in February 1978, exactly one year before the revolution that toppled Iran, the hotel witnessed an extraordinary event.

Unlike other weekend nights, the hotel was closed to the public, and the Imperial Special Guard prevented people from entering the hotel. Several ironed officers, in straight trousers that reached their pointed shoes, were also moving with their cords, and no movement escaped their sharp gaze. Locals knew that this level of security was usually established in the presence of members of the royal family or high-ranking officials of the country.

The headlines of the day were full of hype about the visit of Margaret Thatcher, the then-leader of the British Conservative Party, to Tehran. But the preparation at Commodore was not for her.

Around 4 p.m., wooden and muddy carriages from the royal stable parked on the sidewalk outside. The sun had set, and music resounded from the different cabarets on the street as male waiters in stylish white uniforms bustled about to receive the special guests.

That night, the Turquoise Restaurant on the top floor of the hotel, with a 360-degree view of Tehran, became the scene of an event that was unprecedented anywhere in the world at the time, and it may take years to be repeated in Iran: this was the marriage of two Iranian gay men.

Bijan Saffari–an Iranian intellectual, painter, and architect, who worked as the artistic consultant of the National Radio and Television of Iran and designer of the Shah’s new Niavaran Palace and a modern green park next to the city’s theatre, as well as one of the planners of Shiraz Art Festival–held a ceremony with his boyfriend, Sohrab Mahvi, the other designer of Niavaran Palace. The event was to commemorate their multi-year romantic relationship and to make this celebration in the form of a marriage. It was impossible to register the marriage in legal documents, but the two lovers wanted the ceremony to be as similar as possible to a real marriage, and so they invited a cleric to conduct their wedding.

Although friends and family initially opposed the idea on both sides, it eventually became a reality.

Saffari was also the son of Senator Mohammad Ali Saffari, was one of the closest members of the Senate to the late king. Mahvi was the son of one of the wealthiest Iranian businesspeople of the time. Both were close friends with Empress Farah Pahlavi and regular fixtures at many gatherings and parties of the imperial court of Iran.

The couple decided to have the wedding ceremony at the Commodore Hotel, located a few steps from the park Saffari designed. Saffari was also one of the architects of the Commodore.

The guests included many celebrities. Invitation cards were sent to many military officials. Due to the atmosphere in the early months of 1978–less than a year before the Islamic revolution of 1979–many officials sent a representative or close friend to the wedding in their place.

At 9 p.m., everyone was gathered and light snow started outside. The two grooms, wearing the same clothing, joined hands as the guests cheered them flocking up the hotel steps. The few passersby in that part of Takhte Jamshid Street, overwhelmed with questions and amazement, watched as much as possible. The hotel’s official photographer captured the event, with guests not allowed to take their own photographs.

The flames of the Turquoise Restaurant’s large fireplace, the snow gliding through the restaurant’s all-around windows, and the dim candlelit hall are the memories that still linger four decades later.

The snow didn’t stop the couple from taking the horse and carriage waiting outside to the famous park nearby, where they planned to spend the first hours of the morning in this gay hangout. They left to the astonished eyes of people on the street and rode to the park, which today is still a cruising spot for many gay Tehranis.

The news of the wedding first appeared in the communist and leftist newspapers. Mojahedin, the leftist Islamist militia group, called the wedding “the height of corruption of the Pahlavi regime.” The pro-Soviet communist Toudeh Party’s newspaper called the two men “sick and dirty.” Their secret radio service, broadcasting from Moscow in Persian, asked listeners to kill the couple if they spotted them.

In the tense political atmosphere before the 1979 Islamic revolution–which was supported by the U.S. Democrat Party and then-President Jimmy Carter–many attacked Senator Mohammad Ali Saffari, the father of one of the grooms, the most severely. The situation escalated so much that the couple, who had gone to France for their honeymoon, never returned to Iran.

For more than three decades, nobody knew where the gay couple’s quiet life led except their friends. Saffari died in Paris in 2019, and Mahvi passed away in the United States shortly after him.

The Iranian regime used the love story to damage the reputation of the previous regime, but recently their apologists changed sides. Now that same-sex marriage is accepted in the modern world and the couple’s story is seen as an example of how modern Iran was before the arrival of the new Islamic regime, the regime denies it ever occurred.

For the Iranian LGBT community, the couple and their wedding is one of the rare symbols of the community’s existence.

Tensions between Biden and Saudi Arabia alarm LGBTs in the region