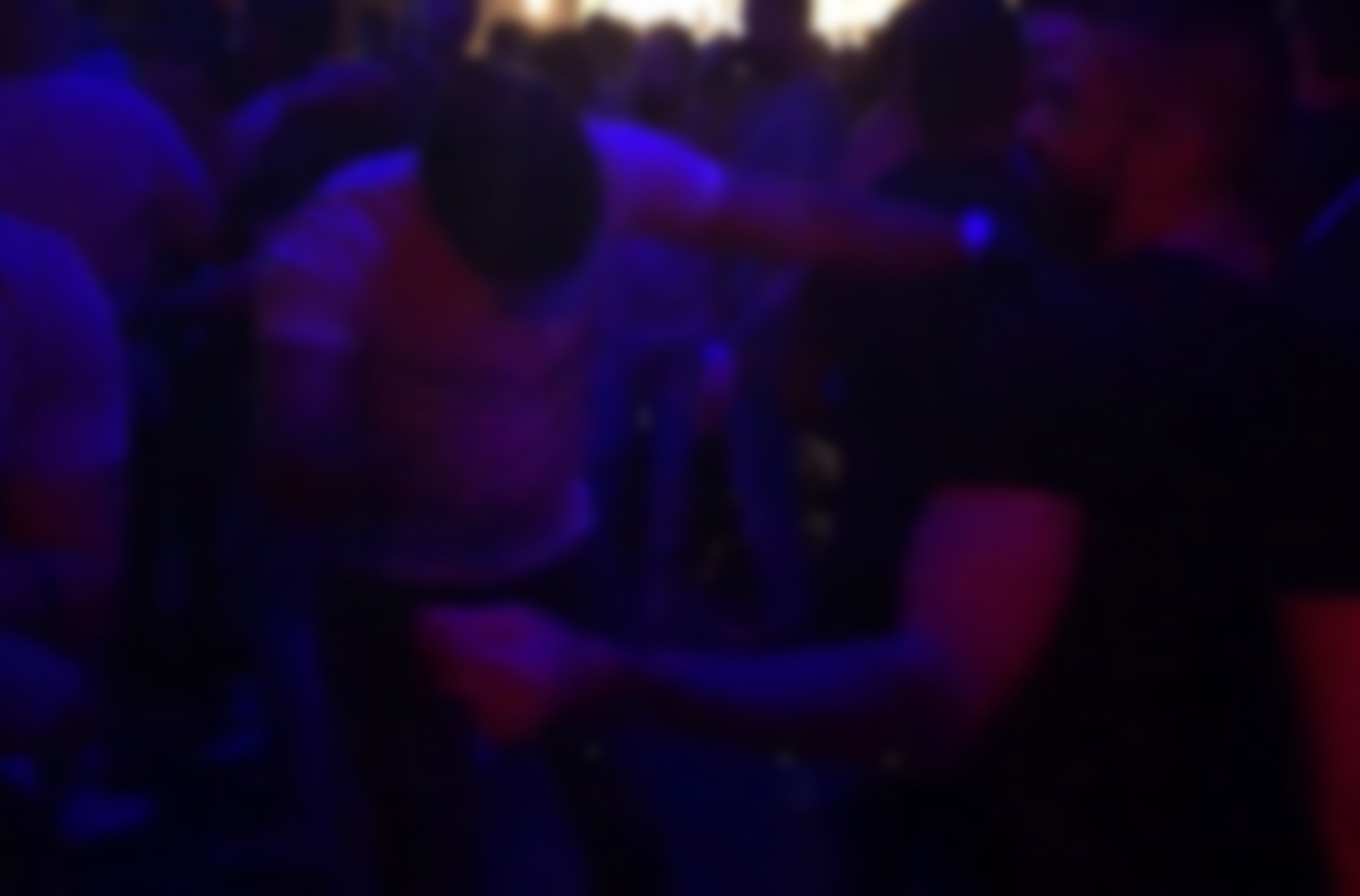 “Are you sure no one followed you?” This was the first question Mohammad asked me when he opened the door. Then he looked at both sides of the entrance door with fear, let me into the house and shut the door. There was no party. It was dark everywhere. Maybe I came early, and the rest of the guests had yet to arrive, I said to myself. We passed through the dark hall and went down the stairs. Mohammad, whom I had met on Grindr, opened a heavy black door covered with a blanket, and in less than a second, he and I were pushed into the basement. The door closed. This is where the party was.

A villa in the modern district of Doha in the city’s West Port is the venue for an underground gay party. An area known for its large malls and modern buildings is considered Doha’s business hub. A symbol of the power of the Arab sheikhdom of Qatar, which is trying to introduce a new form of itself to the world. Now that the World Cup has come to Doha, the symbols of this tournament can be seen everywhere. Posters of Qatari sheikhs holding balls are advertised everywhere. Pictures of football players from around the world and, as far as the eye can see, football fans who have come to Doha from all corners of the planet.

But nothing is normal about the World Cup in Qatar. It’s like there is always a shadow over your head that you don’t do anything against the backward laws of the country. This feeling is not limited to LGBT people. Journalists worldwide keep saying they fear their conversations are being tapped. Football fans from East Asia are constantly angry because Qatari citizens are racist toward them and think anyone from the Far East must be a servant. The city’s streets are full of Arab men, covered in a white dishdasha, and local women are rarely seen. If there is a woman, she is covered in a black veil and is usually guarded by a man.

LGBT people in Qatar can be imprisoned for up to seven years for the crime of homosexuality. The Qatari government’s behavior towards LGBT people is very backward and discriminatory.

When I arrived in Qatar, I first opened the Grindr dating app to see what was happening in the secret life of LGBTs in Doha. I noticed that Qatari LGBT people did not post their pictures publicly on Grindr, but it was surprising that even foreigners also abstained out of fear. Chatting with a few people, I finally met Mohammad, who invited me to an underground gay party.

Let’s go back to the party. The dark basement illuminated by coloured lights was a strange place. In the right corner, a large television showed the CCTV cameras around the house so the guests would be notified if the Qatari police came. I was told in these parties, each person would pay the owner of the house $100 to cover the cost of the party. When I entered the basement, the house owner, Naeem, took the hundred dollars and let me inside. It was unbelievable. Color and light, music and excitement and, of course, fear. More than two hundred gay and transgender men were talking and dancing together. Arabic and Western music was played. In the right corner of the hall, liquor bottles were put on a bar-like table, and a topless, hairy Middle Eastern man was making cocktails.

The basement had no windows and was insulated, so the loud music didn’t go out. The guests came without their cars, so the crowd of vehicles in front of the villa entrance would not attract attention.

Everything was surreal. Apparently, everyone was happy, but almost everyone said that they were afraid of being attacked by the Qatari security forces, arrested and imprisoned, and they regularly looked at the CCTV cameras. For me, as a foreign reporter, this feeling was twofold. I was not sure what would happen. Loud music and alcohol could not overcome my fear. But for the locals, maybe it was normal.

Some were kissing each other. A couple of gay men were cuddling in dark corners, and I even saw two people having sex regardless of the crowd. At the bar, I struck up a conversation with two gay men. Fahad and Rashid, not their real names, were both from Qatar. One is 23 years old, and the other is 30 years old.

When I asked Fahad about his feelings, he said that he was unsure how many spies were among them and whether this party would end well and happily or not. “We are used to it,” he said. “Qatar sells oil. They brought the World Cup to Qatar with money and fraud, which doesn’t matter to the West. The government of the Qatari emirs violates human rights. The Al Jazeera TV channel broadcasts from Qatar to the world to cover the most important news, but no one knows and wants to know about what is happening in Qatar.”

He paused, looked at me and continued: “Didn’t you see how you got into this party?” he asked. “It’s like you entered a group of the most dangerous criminals. It is as if a group of murderers are engaged in slaughter, and they should be afraid of the authorities’ reaction.”

Rashid was still silent. I ask him his opinion. He says, “How do you know I am not a government spy because Qatar’s rulers buy the world with money and even make foreigners spy for them?” Rashid is a tall fit man wearing a Gucci T-shirt, an expensive Rolex watch and a golden wristband. Typical fashion for men from the Gulf.

“Do you know that if they arrest us, we will have to be in prison for years and deprived of all citizenship rights for the rest of our lives?” he continued. I ask if he knows of LGBT people who have been imprisoned. “One of my friends was in prison for four years because they found romantic messages with another man on his phone,” he answered. “They beat him and insulted him in prison. He was even whipped. Another transgender friend, because surgery is not possible in Qatar, planned to go to Thailand for gender reassignment surgery and then go to America to live. His family exposed him to the government after they found out. He is still in prison,” Rashid said.

But there are many transgender women at this party. I talked to one of them. She said she would like to be called Lina. “I have been everywhere in male clothing for years,” Lina said, wearing a long yellow dress, heavy makeup and high heels. “I hate myself. Because I can’t be a good man, and they won’t let me be a woman. Sometimes I go to the street with a black female abaya and veil. No one understands anymore and doesn’t dare to say anything, but since it is not common for a woman to wander alone in the street, it is not easy.

She is about thirty years old. I asked her if she had come to the party in her long yellow dress. “Can I?” she asked, raising her voice. “I came like an ordinary man in men’s clothes. I put my clothes in the closet upstairs, put on my party dress and came downstairs. Even now, I hope the officers will not come for an inspection. Gay men can easily hide, but what can I do?”

She sighed and continued, “I dated a guy on Grindr once. He came to my house, and we had sex. Then he said that he works for Qatar State Security. I could not breathe because I was afraid. Then he started threatening to arrest me if I refused to have sex whenever he wanted. He calls from time to time. Neither the law nor the people nor the world supports us,” she added.

At the World Cup opening ceremony, Gianni Infantino, president of FIFA, rejected criticism about Qatar’s attitude towards LGBT people and said he is a supporter of LGBT rights. He even symbolically said “I feel gay, disabled … like a woman too!”

“How can a heterosexual Swiss man, who is the president of FIFA and has received bribes from the Qataris, understand my situation?” Lina said. “People think that we Qataris are troublefree because we are rich. That is not true. We Qatari LGBT people wake up and sleep with torture every day. Every time I come to these parties or go on a date, I wonder if this will be the last time and if I will be arrested” she added.

At this secret underground gathering, an American DJ plays various remixes of Arabic songs. The guests are dancing and drinking. Qatari citizens are not allowed to drink alcohol, and this can cause them trouble. Alcoholic drinks are costly. In this secret club, a small glass of whiskey is sold for about twenty dollars.

Middle Easterners are famous for their black eyes and hair. Almost all the gay men in this party are hulks with big muscles. Several people have taken off their shirts. Their hairy bodies are unlike anything seen in gay clubs in the West. With these good-looking men, Qatar could become one of the main tourist destinations for gay people if it were free.

What about lesbians? There are no lesbians in this secret club. I asked Mohammad, who invited me to the party. “Women, in general, suffer from much more restrictions. Certainly, it is more difficult for lesbians to appear in public,” he said. “Women cannot stay out late. Can a lesbian cut her hair short? Wearing trousers is considered taboo for Qatari women. Perhaps this is proof of how difficult life is for lesbians. I had a lesbian friend who was forced to marry a man,” Mohammad added.

Around midnight, the music suddenly stopped. Everyone panicked and turned their heads towards the television showing the CCTV cameras. Everyone assumed that the security agents had attacked. Silence, fear, and a sense of escape took everyone for a few seconds. Some started running upstairs. In seconds the DJ reconnected the music. The speaker cable was removed from his DJ set, and that caused the silence. It could happen anywhere, but that silence could have a different meaning in Qatar. Even half an hour after that incident, my whole body was frozen. Mohammad was still next to me. He looked at me, smiled, and said, “This is our situation. We are afraid of everything. We constantly jump on our shadows. The United States and Western governments have a good relationship with Qatar because they get their share of oil. Human rights have no meaning for us Qataris.”

The party ended around one o’clock in the morning. The guests left the building one by one so neighbors wouldn’t notice there was a party there. Just a few weeks ago, a gay party reportedly was exposed to the police by a neighbor, and many were arrested.

I left the party, and on Mohammad’s advice, I walked for several minutes to get a taxi on the street far away from the party venue. The world has forgotten the Qatari LGBT people. Practically, they are the captives of the Qatari sheikhs. The oil wealth is being used to suppress the LGBT community of Qatar.