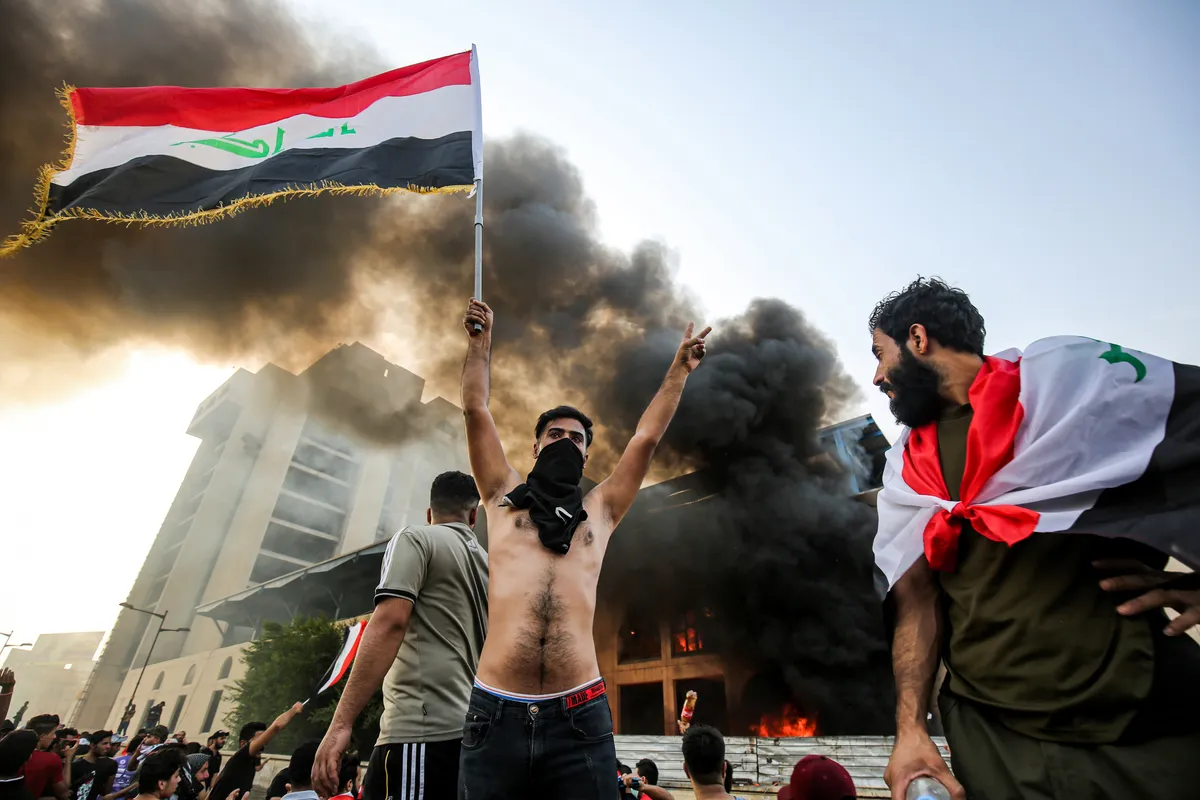 On 17 May 2020, against the backdrop of the European Union delegation in Baghdad hoisting a rainbow flag to commemorate the International Day Against Homophobia, armed militias carried out a campaign of threats against LGBTs that led to a spike in murders and other violence in the country.

Noor, a transgender woman who lives in Sadr City, recalls that brief moment of optimism, before things took a turn for the worse.

“We saw a glimmer of hope, when the rainbow flag was flying on our land,” she says.

“But soon the threats began to spread, and the news of the killing reached us quickly. We hid in our houses terrified of death. They killed many. They were posting their crimes on social media in order to terrorize us. We saw a picture of someone killed with a gun silencer and next to him, the criminal left a threatening message to other LGBTs. We were waiting for death at any moment.”

The pace of violence towards LGBT people in Iraq has escalated dramatically in recent years. In the midst of the chaos and corruption in the country, and the control of armed ideological militias on all aspects of life, LGBT members are suffering from fear of an unknown future.

After the wave of civil society-led demonstrations in Iraq, LGBT rights momentarily surfaced in the fray, and we began to hear voices demanding stolen rights be reinstated. It was an uprising against the authorities of the religious community and the Iranian-linked militias operating in Iraq. But this only led the leaders of these groups to escalate violence towards members of the Iraqi LGBT community.

I had a meeting with members of the LGBT community to talk about their vision of the current reality in Iraq.

“The clerics are the basis of corruption and backwardness in our society. In the past years, they modernized their speeches to appear more peaceful, but their words remain far from advocating for human rights. They publish advice steeped in backwardness, with nothing to do with humanity, and their followers still believe their preaching and follow them convinced of their words. They have set our society further back into barbarism. They fed conflicts and made blood flow in the streets. Today they have the greatest power and the greatest influence on the political class and governance.”

There are no laws in Iraq that explicitly criminalize homosexuality, but sharia courts and civil security committees always have the final say. These bodies are the ones carrying out executions and repeated attacks in the absence of any laws criminalizing their actions. Iraqi laws are unable to protect at once homosexuals, traditions, and religion–all of which come together to feed violence towards members of the Iraqi LGBT community.

“Are you asking me if the government is providing protection and justice to people at risk of abuse? Absolutely not. Unfortunately, justice has never been done to any of the victims of last year’s series of crimes and the years before. The trial record is always closed as ‘honor killings’ and these crimes are not punishable by law.”

Ali, a gay doctor in Baghdad, recalls when his boyfriend was tortured and ultimately took his own life.

“They arrested my boyfriend, after they complained about his appearance. They found dating apps and nude photos on his phone. They tortured and raped him, then they sent him to his family after putting adhesive material in his ass as a kind of discipline. He committed suicide after he sent me a message, writing, ‘This country is painful, you should leave immediately, now I will sleep forever,’” he told me.

VOA News reported that in April 2021 the U.S. State Department under Biden released its annual Human Rights Report. The report stated that LGBT people in Iraq continue to face threats and claimed that the country’s government failed “to identify, arrest, or prosecute attackers or to protect targeted individuals.” The report came in the wake of the brutal 2018 murder of a young 14-year-old boy who was publicly killed on video simply for appearing to be gay.

Despite this, President Biden met with Iraqi Prime Minister Mustafa al-Kadhimi six months after the State Department report. In that meeting he pledged at least an additional $13.5 million of U.S.-taxpayer money for aide to Iraq. The issue of LGBT rights and safety never came up in the meeting.

‘How can I forget the sound of their screams and laughter as they filmed me naked?’