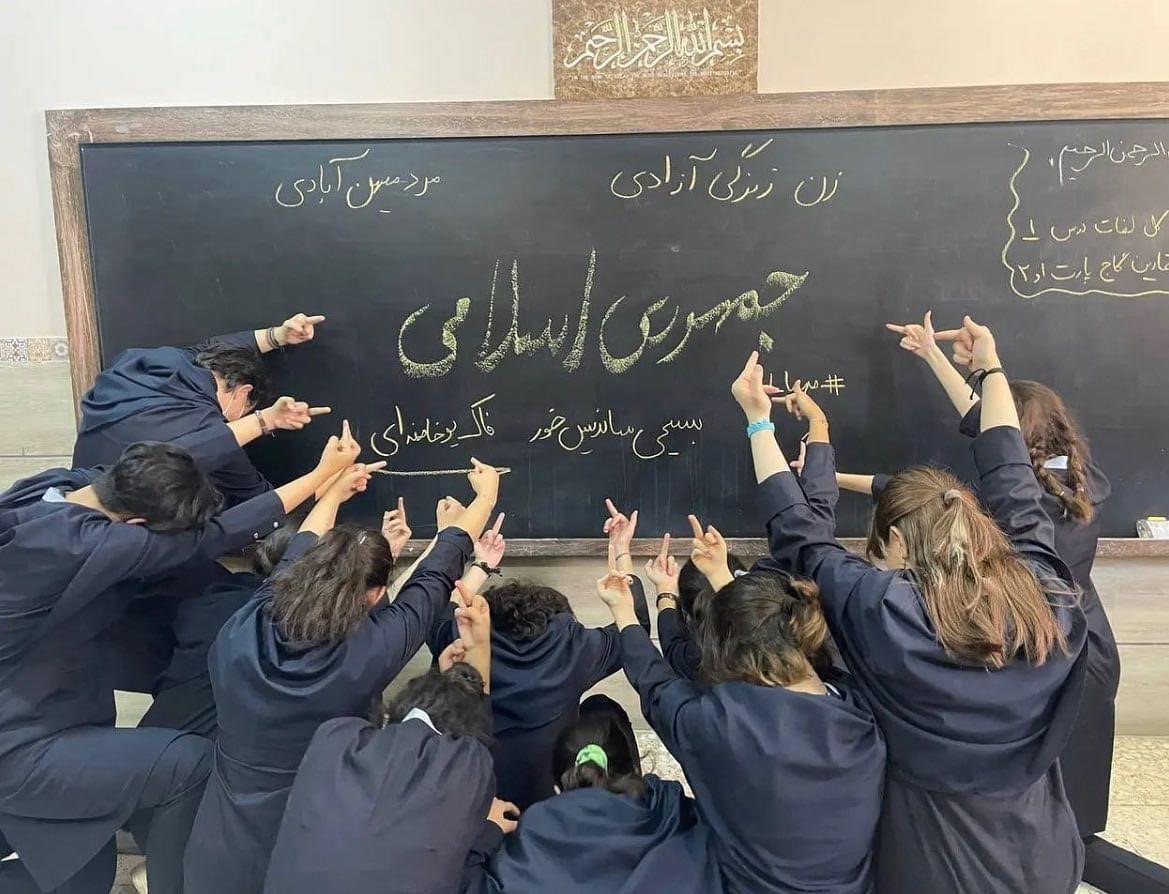 Schoolgirls in Iran give the middle finger, and American gesture, to a chalkboard where the words "Islamic Republic" are written in Persian // Outspoken Middle East

Schoolgirls in Iran have been waving their headscarves in the air and chanting “F-ck you” in reference to the regime’s supreme leader, Ayatollah Ali Khamenei, in an unprecedented show of support for the protests engulfing the country. Striking videos and pictures on social media showed similar demonstrations inside schoolyards and on the streets of several cities.

In Karaj, not far from the capital city Tehran, protesting young girls caused an education official to flee from their school. Footage posted on social media on Monday showed them shouting, “Shame on you!” while throwing empty water bottles at the man as he retreated through a gate.

Similarly, in the southern city of Shiraz on Monday, dozens of schoolgirls blocked traffic on a main road while brandishing their headscarves in the air and shouting “Death to the dictator!” — another reference to Ayatollah Ali Khamenei, who is the ultimate voice and authority on all state matters in Iran.

Several students were also photographed standing in their classrooms with their heads uncovered. Many exhibited their disdain for Iran’s leaders by extending a middle finger, a gesture also considered obscene in Iran, at portraits of Ayatollah Ali Khamenei and Ayatollah Ruhollah Khomeini, the founder of the Islamic Republic. In hopes of attracting the attention of the rest of the world, these teenagers have taken to using the English profanity “F-ck”.

These protests around the country began on Monday, October 3 mere hours after the Iranian dictator broke his silence on the political unrest following several weeks in absentia. He further accused the United States and Israel, Iran’s arch-enemies, of orchestrating “riots”. During his speech, which took place in Tehran’s police university, he also showed complete support for the security forces who have violently tried to subdue the protests.

All of this unrest was triggered by the death of Mahsa Zhina Amini. This 22-year-old Kurdish woman fell into a coma after being detained by morality police on September 13 in Tehran. She allegedly violated the Iranian law requiring women to cover their head with a hijab, or headscarf. She died in hospital three days later.

The first protests occurred in the Kurdish-populated north-western part of Iran, where Mahsa Zhina lived. The demonstrations subsequently spread rapidly across the country.