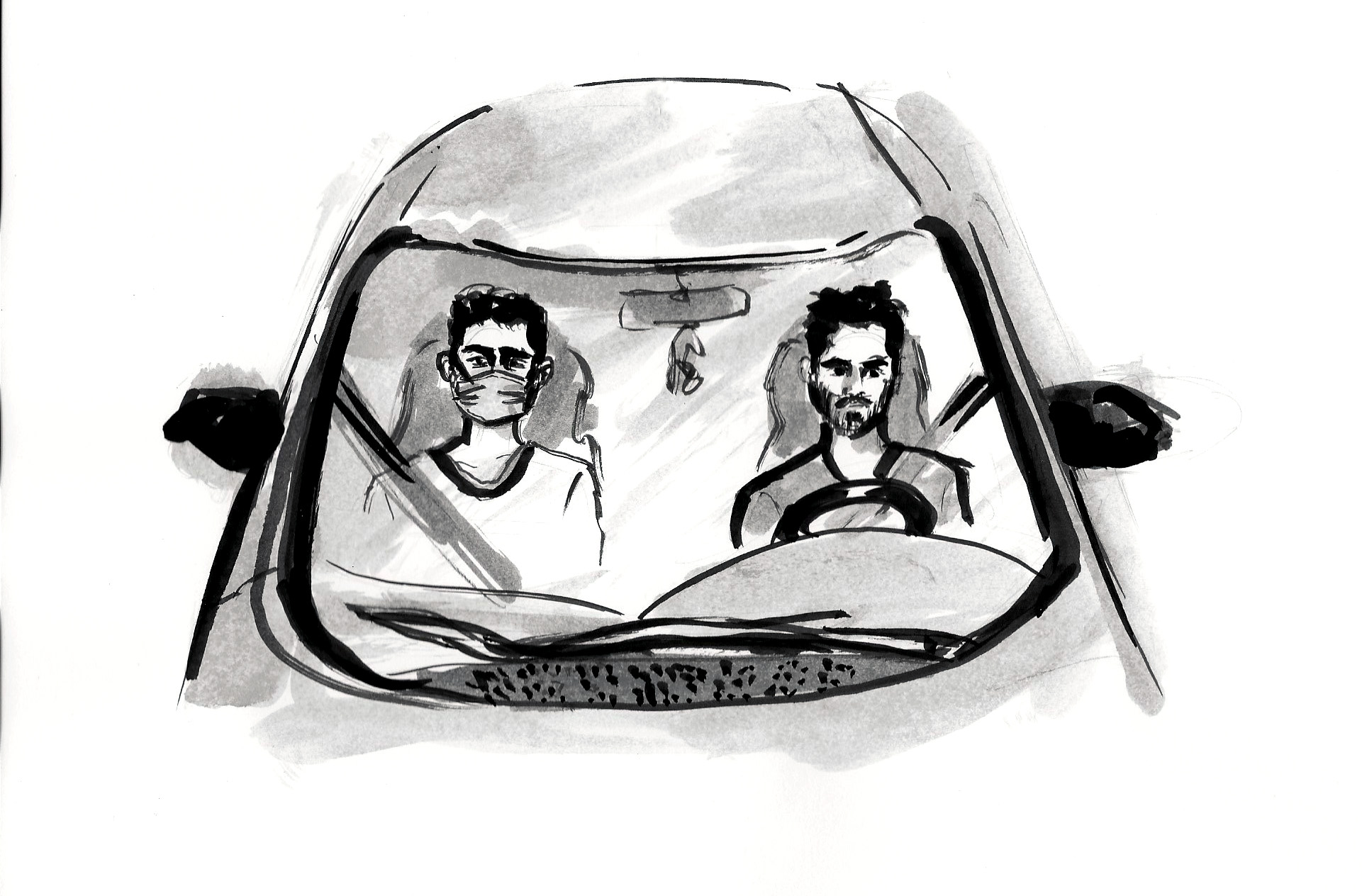 I told Mehran that I would pick him up from Vanak Square in northern Tehran–a prosperous, green, busy square that connects the wealthy north of the capital to the poor south. The streets were sparse and tranquil. Autumn had been dry, but now northern Tehran was blanketed in snow while a soaking of rain rolled over the center and south of the city.

Mehran was standing on the street corner. He is not from Tehran, but he comes to the capital to receive medications. I’ve known Mehran through the internet for a year but this is the first time we are meeting in person. He’s gay, 27 years old, and contracted HIV two years ago. He thinks he caught it from a one night stand. He only got to know he is positive a year ago, by chance, during a routine blood test.

I called and told him not to hang up until I located him. When I saw him, it was too obvious that he was not from Tehran. The rain seemed to upset him and he had a self-conscious air. Even from a few hundred meters away, my gaydar zeroed in on him. While it was not written on his forehead, we gays know each other well. He was medium height with trimmed eyebrows, a pinkish mask, and a handbag hung over his forearm. He opened the door and sat in my car.

I turned down the car radio as he got in. As usual, state radio was broadcasting Supreme Leader Khamenei’s speeches.

“Why doesn’t he die?” Mehran said. Then he laughed and apologized for not taking off his mask. His body’s immunity is very weak. It was a half hour drive to the clinic in southern Tehran. Journalists are not allowed to enter to the so-called “special diseases clinics,” so I asked Mehran to let me give him a ride to the clinic so we can talk.  To confirm his prescription, every other month he has to travel from one of the suburb cities to Tehran to visit the clinic and then a particular drugstore.

“You do not know how miserable the system is! The regime claims they are giving us free medications. Money does not matter. The torture and the sting that you have to hear every time are more horrible,” he says.

“Every time in the clinic, you have to explain from the doorman to the doctor why you are there. There are other people as well. Middle-aged women, hairdressers who caught the virus from one of their clients, and many others. But we, homosexuals, are the ones everybody blames,” Mehran says.

“The last time a hairdresser who is also HIV positive saw me, and probably guessed from my appearance that I was gay, and hit me hard in front of everyone. He shouted that we are the reason behind their misery.”

Mehran lowers his mask to drink some water. I saw his face. The young man is handsome with a bony jawline. He raises his mask and continues. “Ordinary people walking around the clinic are also teasing. It was as if I killed their fathers! Last time a woman shouted, ‘what a pity that our money is given for your medicine and treatment.’ Once, a motorcyclist passing the street in front of the clinic shouted to me, ‘Faggot! Bypass the sanctions and bring us some money.’ He meant that I am a prostitute.”

Mehran is a graduate student in accounting. “I am an educated person, but when the LGBT community is illegal in our country, there is no proper sex education. I come from a religious family. I had heard about HIV and AIDS, but I never thought it would come to me. I had no idea how it was transmitted. Where should I learn? Government radio and television stations generally censor LGBT content or introduce AIDS as a ‘Western infection.’ Information about HIV is not available at all, or if it is, it is from a different angle and more for addicted people. Even if they say something about us homosexuals, it is just an insult and there is no education.”

Iran hides the exact number of people living with HIV and AIDS. The Iranian regime claims between 70,000 and 100,000 HIV positive cases in Iran, but experts say that number is several times higher. A few years ago, the Iranian government arrested several activists and AIDS specialists and convicted them of spying for the U.S. With the collapse of the Iranian economy and Ali Khamenei’s ban on the free distribution of condoms–to encourage population increase–many LGBT people cannot afford condoms. The price of a pack of condoms has reportedly tripled over the past year.

Since 2001, the Iranian government has provided HIV and AIDS-related drugs free of charge to those infected, but Mehran has a different story.

“You prefer to go out of pocket and buy medicines freely, but do not go to government clinics. I had only started going to this clinic last year because I lost my job, and my family is not aware of my illness,” he says. “I lied when the doctor wanted to register my health condition and background. He knew I was lying, and I knew he did not want to report the truth because he knew I might get in trouble. Every time I come to this clinic to go to a state pharmacy to collect my medicine, I do not want anything to happen. At the very least, my family will see and understand me and be disgraced.”

I tell Mehran about PrEP, or pre-exposure prophylaxis, which has been common in the West for many years. The daily medication is nearly one hundred percent effective at preventing HIV infection. He looks at me in surprise and asks, “You mean this medication existed two years ago? If I had not been born in Iran or if the mullahs did not rule Iran,I would probably be better off today,” he says.

I ask him about the pandemic and lockdown. “It was very hard,” he sighs. “I had to deal with my religious parents and my sick body. I also knew that I have a fragile immune system.  Because Khamenei had also banned the import of efficient western vaccines for several months, the so-called “Special Diseases Organization” called me and invited me to get the Iranian Covid vaccine, which I refused to accept. They are not to be trusted, let alone their Covid vaccine. I will not get the Iranian vaccine while having poor immunity and HIV.”

When we got closer to the clinic, he got more anxious. I stopped the car in front of the clinic. “Who wants to be in my shoes?” he sighs. He points to the armed guard. “Every time he sees me, he greets me with insults. He calls me ‘the infected useless.'”