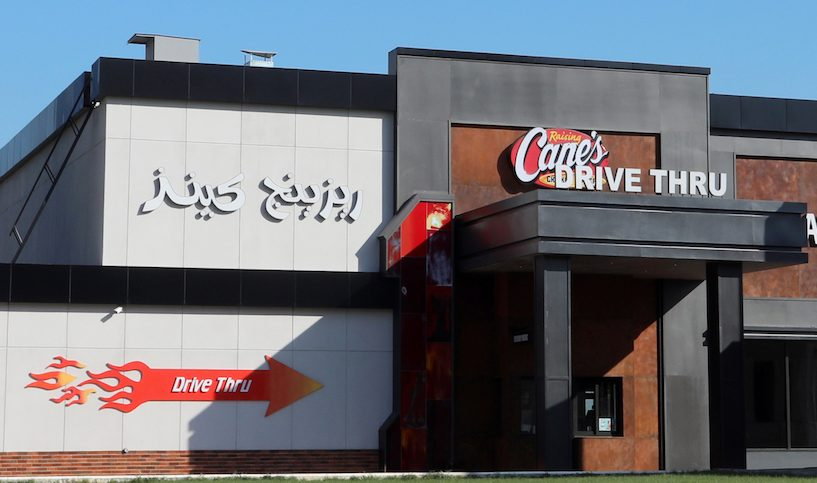 A new anti-gay advertising campaign has been plastered in the streets of Kuwait spreading quickly in the past few days. The slogan of the campaign is “He’s not like me; I’m a man, and he’s a faggot”. The campaign and its slogan have become widely popular on social media platforms, which is surprising since the homophobic slur is often the reason cited for suspensions in the US. The campaign was adopted by Islamic and educational associations, and the banners include dozens of logos signifying the companies that funded the campaign.

In conjunction with these new banners in the streets, a member of the Kuwaiti National Assembly announced that the official authorities removed the slogan “One Love” that was located on the wall outside of an American restaurant in Kuwait’s capital.

The slogan is used by Raising Cane’s, a popular American chain restaurant famous for their chicken fingers, to express the love of chicken and the love of serving the public. The restaurant’s use of this phrase quickly angered some Kuwaitis because of its association to LGBT issues, leading the authorities to respond to their demands for its removal.

Days after the anti-gay banners first appeared, local newspapers reported that the Kuwaiti authorities have deported about 3,000 homosexual and transgender individuals this year. Most of these people were from Asian countries.

According to reports, the Minister of Interior Affairs issued strict orders to “clean the country from homosexuals and women imitators” by launching wide campaigns in all of the governorates (similar to states) of Kuwait. These people were rounded up “because of the outbreak of diseases through the Kuwaiti society caused by their practice,” according to the orders. Similarly, footage has spread throughout the area of the arrest of eighteen members of the Kuwaiti LGBT community. They were arrested on charges related to public immorality and prostitution.

Earlier this month, the Chargé d’Affaires of the US Embassy in Kuwait, James Holtsnider, visited one of the local councils in the country and met with leaders to discuss homosexuality in the area. One of the elder sheikhs spoke about the principles of Islam and Kuwait society’s rejection of the LGBT community. He denounced the tweet published by the US embassy’s Twitter account during Pride Month and called on the United States to stop supporting LGBT Kuwaitis in respect of the country’s close ties to Islam.

Like most Arab and Muslim countries, homosexuality in Kuwait is a crime. However, in February Kuwait’s Constitutional Court repealed the law criminalizing “imitating the opposite sex” in a move Amnesty International said was important for transgender rights in the region.

Article 193 of the penal code has been interpreted by the courts to say that specifically homosexuality among males is illegal and is punishable by up to six years in prison. Furthermore, Kuwait and other Persian Gulf countries criminalize all manner of homosexuality advocacy and propagation. Governments in the area have previously banned screening many films and series that include LGBT characters and themes.