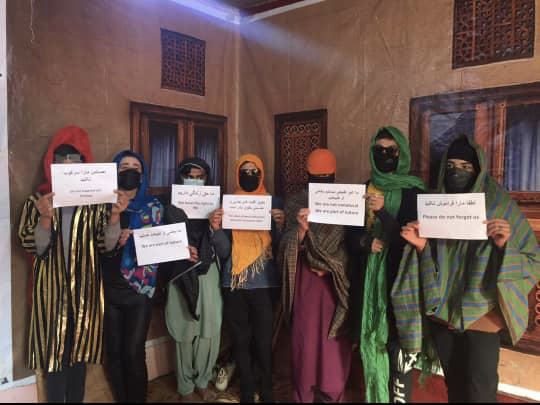 After the fall of Afghanistan last summer, the couple fled to Iran. The Islamic regime of Iran has stringent laws for Afghan refugees and excludes LGBT people from receiving asylum in the country.

The couple, named Juma Gul and Nasir, were arrested after entering Iran last September where they were tortured and sexually assaulted inside Mashhad prison in Northeast of Iran. They were kept in prison for two months and then ordered to return to Afghanistan.

According to reports, the two remained in Iran for nine months where they lived secretly and in poverty until they were arrested again by police in Mashhad. They were immediately deported to Afghanistan due to illegal residence. Activists report that the Iranian police informed Taliban officials of the men’s sexual orientations.

Afghan LGBT rights activists say that they have been trying for months to convince the United States to accept the couple’s asylum applications within the so-called “Afghan refugee asylum scheme,” which was announced last year. Still, activists believe the scheme was nothing but smoke and mirrors by U.S. President Joe Biden’s government or, at the very least, the U.S. government is discriminating against LGBT asylum seekers by intentionally not responding to their applications.

At the same time, it was reported that three transgender people were arrested in Herat City, in western Afghanistan. After arresting the three people who lived together in a house, Taliban forces beat them before taking them to a detention center. Based on exclusive images provided to Outspoken Middle East, the household belongings of the three individuals were confiscated after their arrest and their houses have been emptied.

One of the three transgender people told one of his friends in a call from inside the prison that the Taliban soldiers were beating them and said that they will soon be “tried in public.” Human rights activists say that “trial in public” means execution under Taliban laws.

In its previous government, the Taliban regime executed transgender people. In one case, in 1998, 11 men stood next to a rock wall that was toppled down on them.

During the past two decades, the LGBT community has made modest gains inside Afghanistan. Under the U.S. occupation, the previous government did not arrest LGBT people, and even some government officials and members of the former parliament talked about the rights of LGBT people.

After the catastrophic U.S. exit from Afghanistan last August, there have been many reports of harassment of LGBT people in the country. The LGBT community of Afghanistan considers Biden responsible for what happened to them and say Biden is the main culprit in Afghanistan’s current situation by handing the country back over to the Taliban.