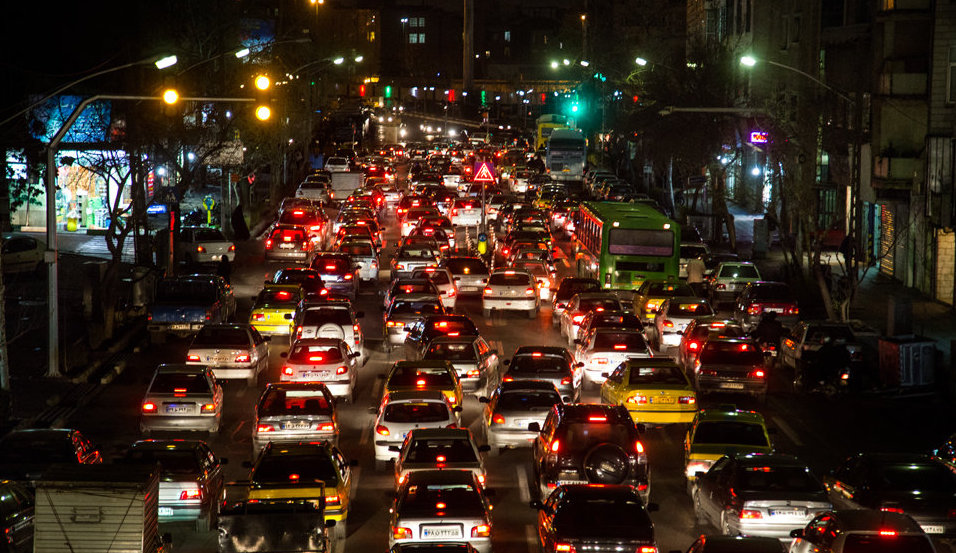 “We do not have homosexuals in Iran.” He blinks, shifts up the streets of northern Tehran, and continues. “Now this car is going by itself. It has no driver. I do not exist!” Babak, a gay man in his 20s, says. “Iran doesn’t have any gay men, right?” He’s referring to an infamous comment made by former Iranian President Mahmoud Ahmadinejad, who, in a 2007 speech at New York’s Columbia University, claimed Iran doesn’t have any homosexuals.

But of course, Iran does. Hidden from the eyes of the authorities, a colorful gay life–pumped full of a young, vibrant, resilient, LGBTs–flourishes in the shadows.

During the weekend rush hour in Tehran, I hung out with Babak, his boyfriend, and a friend of theirs, also in their 20s, to see how the Iranian LGBT community gets together in a country where homosexuality is punishable by death.

Out-of-marriage relationships are forbidden even for straight people in the Islamic Republic of Iran. Many boys and girls get arrested for dating, talking, or even drinking a cup of coffee in a coffee shop if they are not officially married to each other.

The so-called morality police follow girls and boys in the streets to make sure everyone observes Islamic sharia law. Because of this, riding in cars is a pastime for young people, driving around the city streets in groups. Uptown Tehran is the most popular cruising spot. The youngsters regularly drive around and exchange phone numbers with others.

Khashayar, Babak’s boyfriend, sits in the backseat and says it was easier before. “They used to put banners in restaurants and cafes that girls and boys could not enter together if they were not married. Babak and I would hold hands and enter the cafe, and no one would care what was happening,” he says.

“Our straight friends could not come to the restaurants, but we enjoyed our time happily because the authorities were too naive to know two men could also be in a relationship. Even some places turned into dating spots for the gay community. If the government inspectors had come in, they would see a handful of men sitting together or groups of single women enjoying their time away from men.”

“But now things have changed,” Babak says. “We must be careful. As people become more aware of the existence of the LGBT community, many people could guess, even make fun of us in public.”

He recalls the night he realized things were escalating. “Once, we went to a romantic restaurant in the north of Tehran. Mostly young families or couples were sitting, and there were candles on tables. When Khashayar and I entered, almost everyone guessed what was going on. Even the waiter was not sure whether to light the candle on the table or not. A young man sitting at the table next to us with his wife asked the waiter not to light the candle on our table as he was ‘disgusted.’ We did not react, but it did not feel good at all. That’s why most of our fun is wandering the streets in a car. Of course, Khashayar and I have each other. Tonight we came to see if we could hunt a Mr. Right for Amir Ali.”

How does one know who is gay and who is not in this heavy traffic and crowded city? Khashayar laughed. “In Tehran, all men are gay unless proven wrong.”

Amir Ali has his face buried in his mobile phone. He has pulled up the Grindr dating app and is exploring nearby men. “Some of these people are in the same traffic,” he says and laughs. “See how simple it is!”

Of course, it is not so simple. The regime’s security forces and checkpoints are set up all over Tehran. Youths’ cars are searched, non-married men and women could get into trouble. Even listening to unauthorized Western music in your car could put you in danger.

Khashayar says he is not afraid. The security forces are also tired. “The situation has been like this for 40 years, but we people have not lost it. We are the generation who did not even see the Islamic revolution, and the regime tried very hard to brainwash us. I was only ten when Ahmadinejad said there are no homosexuals in Iran. But his words were of no value to me. With the help of the Internet and satellite televisions, we have learned that we must be proud and fight.”

Amir Ali is not interested in the discussion. His phone keeps dinging from the backseat with new messages on Grindr. In the darkness of the Tehran night, his eyes shine. “Madam! At the next junction, a guy is expecting us. Look how good he is in the picture!” Amir Ali shouts, sticking his phone in front of Babak’s eyes as Babak navigates us through a traffic jam. “I told him to stop there so we could pass by and pick him up.”

I ask Amir Ali if he is scared at all. What if these photos were fake and the authorities had trapped him? “What should one do? We only live once,” he says.

The cars are lined up in a row. Some are honking for pedestrians. Louis Fonce’s song Despacito is still viral in Tehran, and you can hear it in all cars. This is another forbidden song here, but it seems that no one cares anymore. Amir Ali curiously looks for the muscular guy he chatted with on Grindr. “Oh no! Go!” he cries. “Don’t stop! He is not as good as he looks in his photos.”

I tell him to say to the guy that he is not his type. He answers with a laugh. “I am too busy, my dear! Let me save the time to look for someone else.”

I ask Amir Ali how often he dates people in the streets. “As much as young people in free countries date in bars and clubs,” he answers. “We are not alone. All young people our age do the same. Of course, it is very bitter that the rulers of Iran deprive us of a happy moment. I still cannot understand why the regime’s goons don’t want to see us happy.”

Amir Ali maintains his gaze out the window as we creep along. We pass a car. He lets out another shriek and asks Babak to slow down. Amir Ali knocks on the other car’s window and asks the driver to talk to him. The young, good looking guy behind the wheel is cool and poised. Amir Ali greets him with a laugh. ‌”Hi, handsome, can I have your phone number?” he asks with a grin. The young guy smiles and replies calmly, “No, bro! I’m not gay. But you are fearless!”

Amir Ali, Babak, Khashayar, and I were all shocked for a few moments. Amir Ali breaks the silence. “I am sure he was gay.”

This happens several times throughout the night.

Many other young women and men did what we did. We were all trying to find someone to love. I told Khashayar that at least on the streets, straight people seem more sympathetic to the LGBT community while also trying to date each other in secret. “But the authorities do not deny their existence,” Khashayar says. “Remember, Iran doesn’t have any LGBT citizens.”

Related Topics:FrontFeaturedIranLGBTNightlifesex & dating
Up Next

An encounter with a sex worker in Damascus