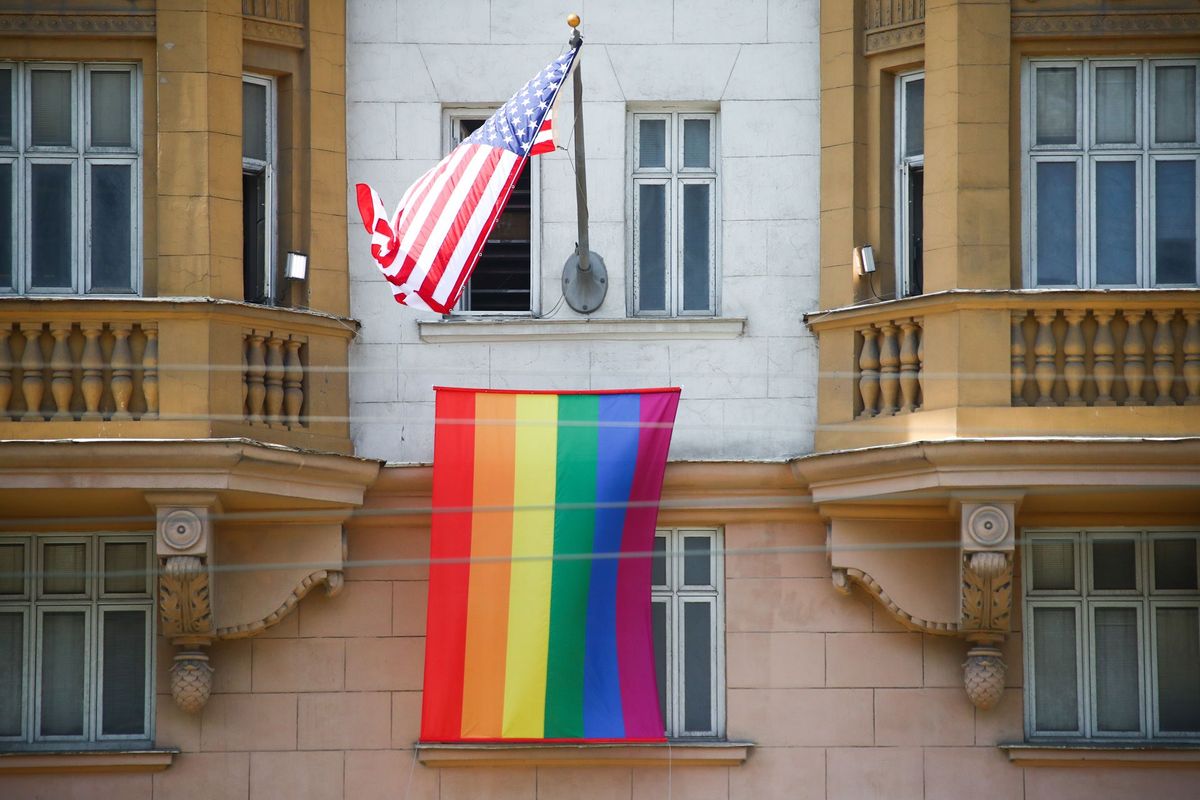 The gay Pride flag hangs outside the U.S. embassy in Moscow in July 2020 // Getty images

The Biden administration has released a pair of conflicting messages regarding the celebration of Pride month and the recognition of the LGBT community. While a statement on the recognition of Pride month made mention of fighting for LGBT people around the world, a special message sent to U.S. embassies declared that the display of Pride flags may not be appropriate in some countries.

The proclamation also condemned recent legislation in certain states that the right has branded “anti-grooming” legislation, and in the same breath stated a commitment to fighting for LGBT people around the world. “We condemn the dangerous State laws and bills that target LGBTQI+ youth. And we remain steadfast in our commitment to helping LGBTQI+ people in America and around the world live free from violence,” it read.

However, a recent message sent to the U.S. ambassadors from the Biden administration calls that “steadfast” commitment into question. A cable from the State Department on the subject of Pride flags was shared with Outspoken via an anonymous source. The cable insinuates that the display of the Pride flag is inappropriate in some contexts and in some countries. The message says that ambassadors “may decide to fly Pride or Progress Flags as appropriate and depending on local context.” It goes on to say that the “U.S. display of the Pride flag will not be appropriate in all contexts,” and that it is up to the discretion of the ambassador in each country.

Biden was similarly called out on this issue last year when his administration continued a previous policy of not flying the LGBT flag over military buildings. This was despite what then-candidate Biden tweeted in June of 2020. “Banning the LGBTQ Pride flag — the very symbol of diversity and inclusion — is undeniably wrong. The Pentagon should ensure it is authorized, or as President, I will,” the tweet read.

The latest cable issued to the ambassadors could be in response to a recent skirmish in Kuwait. A tweet from the U.S. Embassy in Kuwait quoted Biden’s proclamation about Pride month and included a rainbow flag image. “‘All human beings should be treated with respect and dignity and should be able to live without fear no matter who they are or whom they love.’ @POTUS is a champion for the human rights of #LGBTQI persons,” the tweet read.

Homosexual relations are criminalized in Kuwait, and the country’s government rebuked the embassy for its tweet. They also issued a summons for the acting U.S. Embassy Charges d’Affaires James Holtsnider.

Instead of pushing back on the Kuwaiti government in solidarity with the LGBT communities in countries like Kuwait in a move to show their “steadfast” commitment, the Biden administration has opted to bow to the local pressures in allowing embassies to fly the pride flag only if it is “appropriate.”

The controversy of flying Pride flags at U.S. embassies harkens back to 2019, when virtually every mainstream media outlet in the U.S. falsely reported that the Trump administration banned embassies from flying the flag during Pride month. That year, of the 307 U.S. embassies, consulates, and diplomatic missions around the world, three requested to fly the Pride flag during the month of June. The embassies were told they could fly the flag anywhere on the premises as long as it was not on the central flagpole, which is reserved only for the American flag and no other flag. A handful of embassies, including in Germany, did display the flag that year. In accordance with longstanding State Department rules, none were on the central flag pole.

LGBT Iranians have a powerful message for Mayor Pete